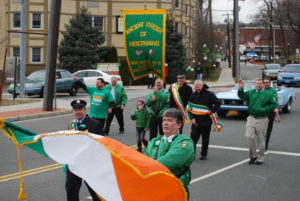 THE 2021 GLEN COVE ST. PATRICK’S DAY PARADE HAS BEEN CANCELED DUE TO THE COVID-19 VIRUS CRISIS

Glen Cove Parade Inc., which runs the annual Glen Cove St. Patrick’s Day Parade, hereby announces that this year’s Parade, which had been scheduled for March 21, 2021, has been canceled due to the continuing COVID 19 virus situation.

As organizers of the Parade, we feel morally obliged to avoid any chance of endangering our families, friends, guests, and the community at large by continuing with plans for this year’s Parade.  We look forward, instead, to marching again on March 20, 2022.

We deeply appreciate the understanding and support of the community for this decision and for the generous financial response we have received to our continuing appeal for support for the St. Vincent DePaul Society, the parade charity chosen by Grand Marshal Gerard Herbert, and his Aides, Carolyn McGillicuddy and Eric Hill.

For further information, please visit our webpage at www.glencoveparade.com or our Facebook page at www.facebook.com/glencoveirishparade. You may also text or call us at 516-782-7494.

The Grand Marshal of the 2022 parade is Gerard “Gerry” Herbert.  Gerry is a native of County Galway, Ireland and a longtime resident of Glen Cove, where he runs a successful HVAC business and has for many years been deeply involved in running the Glen Cove St. Patrick’s Day Parade.  Aides to the Grand Marshal are educator Carolyn Masterson McGillicuddy and auto specialist Eric Hill.

The Parade has taken place annually since 1989.  It has grown to be the largest annual parade in Glen Cove and a joyous celebration that is eagerly awaited each Spring by residents of Long Island.

The Parade begins to form up at 12 noon in the area of the Finley Middle School on Forest Avenue.  It steps off at 1 pm, following a route through downtown Glen Cove to St. Patrick’s Church.  There is  ample parking in Glen Cove’s municipal parking garages and at the end of the parade route.  Shuttle buses will run between the parking areas and the formation area.

The heart of the parade, as always, will be its exciting mix of marching groups, including many bands of Irish pipers and other marching bands.  Further color will be added to the festivities by vintage cars, costumed performers, face painters, fire and police units and much more.  The parade is a true community celebration of the coming of Spring with all of our areas’ ethnic organizations, often in costume, taking part.  Come, join the fun!

For more information, please visit the parade website at www.glencoveparade.com or call 516-782-7494.

The Glen Cove St. Patrick’s Day Parade receives NO public or municipal financial support.  We depend solely on corporate sponsorship and individual donations to the Glen Cove Parade Committee Inc.  Please visit glencoveparade.com to review support opportunities. All parade expenses are paid in this way and all amounts collected in excess of those expenses are donated directly to carefully chosen charities.  Our selected charity for the 2020 Parade is the St. Patrick, Glen Cove Council of the St. Vincent de Paul Society.   This worthy charity was chosen because of its dedicated service to the people of our community.

Past and Present Grand Marshals

It is our custom each year to honor a person as “Grand Marshal” of the Glen Cove St. Patrick’s Day Parade, and one or more additional individuals as “Aides to the Grand Marshal’: