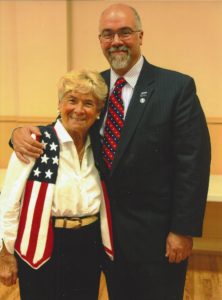 For the first time in its history, the Glen Cove St. Patrick’s Day Parade will be led this year by a mother and son, Julie and Chris Albin.

Julie Albin was born in Glen Cove Hospital (when it was a small operation located somewhere in the area where Wendy’s is now).  She was the youngest of three girls and is a true “Valley Girl”, having always lived in Locust Valley.  She attended Glen Cove High School, since Locust Valley had no high school then.  After graduation came business school.  Julie’s father was one of the only two only Italian businessmen in Locust Valley.  Her mother owned and ran a gas station and grocery store.  As adults, my two sisters became businesswomen with their own businesses as well.

From high school, Julie went to Mrs. Skinner’s School for proper young ladies.  The school was located in the Garden City Hotel.  She was the only blue collar student among the socialites and debutantes

Upon graduation, Julie. I got my first job at Long Island Lighting Company as a draftsman.  In 1955 she married Bob Albin, a handsome sailor of Irish descent whose family were early settlers in America.  Julie left that job in 1958 to become her receptionist at her sister Terry’s very successful shop, “Tamar Hair Stylist”.  Her customers were doctor’s wives and society women, who sponsored Julie as a member of the Auxiliary in 1964.

In 1965, Terry helped Julie open “The Casual Nook”, a boutique attached to the shop.  When Chris was born in 1967, Chris, Julie’s mother helped her be mother, wife and business woman.  When Chris was 14 years old he followed in Julie’s footsteps and became a junior volunteer at the hospital.

Cancer took Bob in 1991.  Terry and Julie kept the shop until June 1996.  Julie then joined Friends of the Arts at Planting Fields, and immediately became the Playbill Advertising Manager and Head of Raffles.  She recruited some of my fellow LAOH ladies to volunteer.  They all had some wonderful times there.

When Friends of the Arts ended its 36 years of fun and glory in 2008, Julie turned her energy into the Hospital Auxiliary and eventually became Fund Raising Chairperson, a job she loves.  She feels she owes the hospital a great deal for what it has done for her and her family in some very difficult times. She is very grateful to the many doctors, nurses and staff who were there to encourage Chris.

Julie is also a Director at The Locust Valley Friends of the Library and a member of the Executive Committee of the Morgan Park Music Festival.  She is one of the original members of the LAOH and has watched it grow.  She is proud to be a member of the organization, honored to be this year’s co-Grand Marshall and thrilled to share this honor with her son, Chris.