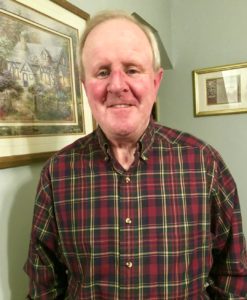 Glen Cove, NY, January 13, 2019: The Glen Cove Parade Committee, Inc., organizers of the Glen Cove St. Patrick’s Day Parade, has announced the selection of Patrick “Patsy” Furlong as Grand Marshal of the Glen Cove St. Patrick’s Day Parade.  Mr. Furlong is a native of County Wexford, Ireland, and a longtime resident of Glen Cove, where he owns a successful landscaping business and has been a beloved member of the staff at All Saints Regional Catholic School for the past twenty years.  Patrick is an active member of the Glen Cove Hibernians and has been instrumental in promoting the Parade for many years.

Patrick Furlong was born on St. Patrick’s Day, March 17, 1958 in New Ross, County Wexford, Ireland, the eldest son of the Ellen and Joseph Furlong.  He was educated at Poulpeasty School and the New Ross Vocational School.

Upon graduation, Patrick became interested in the trucking business, ultimately finding him driving tractor-trailers literally across the length and breadth of Ireland, from Wexford in the southeast corner or the country all the way to County Donegal in the far northwest.

It wasn’t until April 8, 1983, when Patsy’s brother, Martin, asked him to be Best Man at his wedding, that Patsy gave any thought to emigrating to the United States.  That day he had the good fortune of meeting the beautiful Nancy Merrick of Sea Cliff, Long Island, who was to become his spouse, in 1988.  Patsy became a proud U.S. citizen in 2002.

Patsy and Nancy live in Glen Cove, Long Island with their daughter, Emily.  Patrick is a valued member of the community, known fondly to generations of students at All Saints as their devoted “Mr. Patsy”, who escorts them to school from their buses each morning and, as head custodian, has their historic school building in pristine condition.  He does all this while also running his own landscaping business, pursuing his love of gardening and the outdoors.

Patrick Furlong has been an exemplary Hibernian since 1983.  He has held positions as Marshal and Recording Secretary.  The clearest signs of the high esteem in which Patsy is held by his sister and brother Hibernians are the facts that he was named Aide to the Grand Marshal of the Parade in 2003 and that he has now received the the highest honor, that of leading us all as Grand Marshal of on his 61st Birthday, of the Glen Cove St. Patrick’s Day Parade.