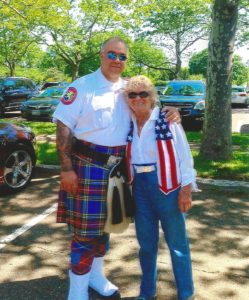 For the first time in its history, the Glen Cove St. Patrick’s Day Parade will be led by a mother and son, Julie Albin and Chris Albin, who will be the Grand Marshals of the Parade.

Chris Albin was born in 1967 to Robert and Julie Albin of Locust Valley, where he grew and attended school.

As Chris tells it, in 1978 his parents decided he needed to learn to play a musical instrument; Chris wanted to learn the trumpet, but they overruled him and arranged private drumming lessons.  He immediately fell in love with the drums and never looked back.

In 1979, at his mother’s request, Chris became a snare drummer in the Gordon Highlander’s Pipe Band of Locust Valley.  His father took him to practice each Tuesday and to all the performances.  This led to his father joining the band and, eventually, to his leading the band as Drum Major.  Chris had many memorable moments with the band, performing at the opening of the Hard Rock Café in New York City, multiple times at the Waldorf Astoria, at floating barge party in New York harbor during the Macy’s 4th of July fireworks display, and yes, even making it to Carnegie Hall.  Chris says the best thing about his time with the Gordon Highlander’s was sharing the experience with his father.

During high school, Chris, following his mother’s example, began doing volunteer work at Glen Cove Hospital.  He was assigned to the Emergency Room and quickly fell in love with the work.  After watching the doctors and nurses work feverously at saying lives and helping people, Chris knew he wanted a career in medicine, specifically as an emergency room nurse.

Chris graduated from Locust Valley High School in 1985.  During that Summer, he was approached by a friend’s father who knew of Chris’ love for emergency medicine and suggested that he join the Locust Valley Fire Department, and become an Emergency Medical Technician.  Chris loved the idea, joined the department and began an EMT course.

In 1987, Chris graduated from Nassau Community College and became a Registered Nurse.  There was no doubt in my mind where he was going to be employed.  His dream job was to serve his community at Glen Cove Hospital.  He became an RN in the Intensive Care Unit.  He eventually worked in multiple units including 2 South, ICU, CCU, the Emergency Room and the Recovery room.  During his time at the hospital Chris had the pleasure of working with and learning from some great people, all while helping his community.

In 1994 Chris realized another dream, being sworn in as a Police Officer with the City of Glen Cove Police Department.  He worked as both a per diem as a nurse in the ER and a police officer for many years.  During his 23 years with the Glen Cove Police Department Chris has worked in many rolls such as patrol, DWI enforcement, motorcycle patrol, narcotics enforcement, and his current position in the detective division. Chris was promoted to detective on Saint Patrick’s Day in 2011.   He has received 49 commendations for excellent police duty, the Nassau County Police Chief’s Award for distinguished service, two citations from the American Legion for exceptional police action, and honored twice by Mothers Against Drunk Drivers for his DWI enforcement.

In 2012 Chris joined the Nassau County Police Department Pipes and Drums as a snare drummer.  Being back in a pipe band rekindled his love of his Irish heritage.  In 2016 he was privileged to play with the band at the Centennial Celebration of the Easter Rising in Dublin.

Chris is also a member a member of several community organizations such as the Matinecock Rod & Gun Club, the Knights of Columbus James Norton Council, and the Matinecock Masonic Lodge 806.