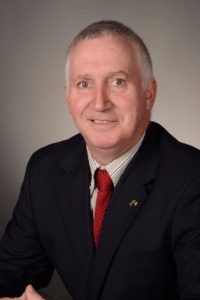 The Grand Marshal of the 32nd Glen Cove St. Patrick’s Day Parade scheduled for Sunday, March 20, 2022, is  Glen Cove businessman, Gerard “Gerry” Herbert, a native of County Galway, Ireland.  A member of St. Patrick’s Parish and of the Glen Cove Ancient Order of Hibernians, he is one of Parade’s long-time organizers.

Gerry was born in Ballyconneely Parish, the youngest of five children born to John and Bridget Herbert.  His four siblings were born in England, where his parents had emigrated before returning home to Ireland.  Gerry attended St. Brigid National School in Ballyconneely and went to secondary school at Clifden Community School.  His education continued thereafter at the National Fishing Training Centre in County Donegal.  He went on to work on fishing trawlers sailing from Roundstone, back home in Connemara.

Gerry met a beautiful Galway girl,  Susan, from Ballinfad, Galway, in 1986.  They emigrated to the U.S. in 1988, first to San Francisco, where Gerry worked in the construction and moving businesses, before coming to the east coast to join Gerry’s sister, who lived in Sea Cliff.  Gerry worked at Glengarriff Rehab and Healthcare Center in Glen Cove.  There, he became interested in HVAC systems and trained for that field at BOCES.  After working for air conditioning companies Gerry and a partner started their own business in 2000 and, in 2003 he established Twelve Pins Mechanical, Ltd.,  the full service heating and air conditioning company he continues to operate in Glen Cove.

Gerry and Susan Herbert have three children, Stephanie, an event planner, Keith, employed at a supply house in Hicksville, and Noeleen, a student at Finlay Middle School.  Gerry’s other great passion, in addition to his family and business, is golf.  An avid player, he has been a member of the Glen Cove Men’s Golf Club since 2005 and may be found at the Glen Cove Golf Course every Sunday.