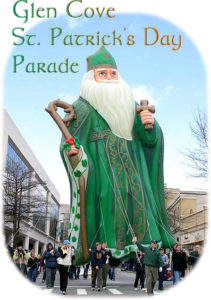 The Parade has taken place annually since 1989.  It has grown to be the largest annual parade in Glen Cove and a joyous celebration that is eagerly awaited each Spring by all residents of the North Shore and the entire Long Island community.

The parade is followed by a family-friendly post-parade party at St. Patrick’s Parish Hall, at the end of the parade route.

The heart of the parade, as always, will be its exciting mix of marching groups, including many bands of Irish pipers and other marching bands.  Further color will be added to the festivities by vintage cars, costumed performers, face painters, fire and police units and much more.  The parade is a true community celebration of the coming of Spring with many of our areas’ ethnic organizations, often in costume, taking part.  Come, join the fun!

For more information, please visit the parade website at www.gcirishparade.org or call 516-782-7494.