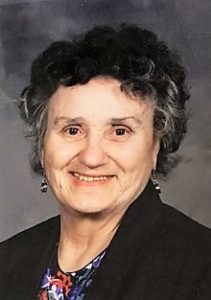 Sophie McCabe was born in 1935 to Mary and John Schepanski, the sixth of eleven children.  Sophie graduated from Glen Cove High School in 1953 and went to work as a payroll assistant at Wah Chang, which later became Li Tungstun.

Sophie met the love her life, Jim McCabe in 1952, while in Junior High School.  They married in 1956.  Much of their time was spent raising their two sons, James and Matthew. The McCabe family now includes five Grandchildren and eight Great Grandchildren.

Sophie grew up a member of St. Hyacinth Parish.  She married Jim at St. Patrick and has been an active parishioner there ever since.   She was an original member of the First Saturday Group, helping host the Rosary, Mass and Continental Breakfasts.  Sophie is also a member of the Immaculate Heart of Mary.

Currently, Sophie is a member of the Legion of Mary, and the Columbiettes.   She is actively involved in the Senior Center and served lunches for many years.  She is a member of the Happy Hour Club as well as the Centre Club, assisting the hosting of trips and parties.  Sophie was a was Member of St. Hyacinths Unity Club, President of the Sea Cliff Homemakers and the Locust Valley Homemakers.

Sophie proudly s joined the then “Ladies Auxiliary” of the Hibernians in 1957 and was Madam President for 2 years.  She continues to assist both the AOH, the LAOH and the Parade Committee as a strong financial supporter.  She has a knack in always selling a great many raffle tickets to fund the Parade.

Several years ago, both she and Jim received the St. Agnes Medal from the Diocese of Rockville Centre.

Sophie was named Aide to the Grand Marshal of the 2017 Glen Cove St. Patrick’s Day Parade in gratitude for her support of our church, the community and the Hibernians.